Back to All Posts

One interaction can change everything… and that’s exactly what happened when we met the creative and gregarious creators of Chuckleberry Trading Co.

While they’re based out of Toronto’s west end, our Maunders Marketplace team had the privilege of meeting Chuckleberry Trading Co. at the Aurora Farmers Market… and we couldn’t get enough!

Humorous, kind, and talented, Stuart and Charles captured our hearts (and our taste buds) with their incredible sauces, hummus, and cheesecakes. 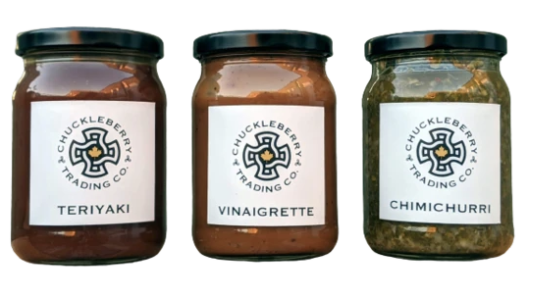 From there, it was no question — we had to work with them.

While Chuckleberry Trading Co. had been exclusively selling at pop-ups and markets across the GTA, Maunders Marketplace is proud to welcome their creations in both of our locations.

That’s right. You can get your Chuckleberry fix all year round — right here in Aurora.

The Chuckleberry team has one goal, and that’s to make the world a more fun and tasty place.

Meeting as bartenders, Chuckleberry Trading Co. founders Stuart and Charles bonded over their passion for food, drink, and all things delicious.

As busy food industry professionals, the two were tired of forcing down microwavable meals on their breaks and craved something more. In response, Charles began cooking and curating dishes for Stuart to try. 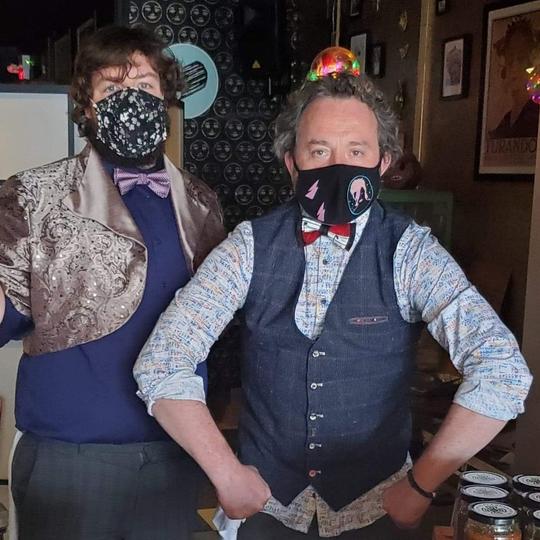 “When you’re eating restaurant food or bar food all the time, it’s nice to have something home-cooked. And [Stuart] always kept saying, one day I’m going to crack open your head and get all of these ideas. I used to just laugh it off, but then COVID came.” – Charles

Looking to leave the bartending world as the COVID-19 pandemic hit, the two soon realized the opportunity in front of them.

“I was like, this food is the best food I’ve ever had. Let’s do this. Let’s get these sauces into jars and see what happens.” – Stuart

Starting their venture at their first market in August 2020, Stuart and Charles’ first sauce, ‘CB Sauce’, quickly became a huge hit. From there, they created a hummus, a chimichurri, a vinaigrette, a teriyaki, and pesto.

Taking a sweeter turn, the duo also began working on homemade cheesecakes in a jar and ice cream sandwiches — two items that are now their biggest sellers.

“We’re good friends, so spending time together isn’t a chore. We love what we’re doing, and I think you can taste that in the products.” – Stuart

Chuckleberry’s line of unique sauces each have diverse flavour profiles and contain only natural sugars, giving them versatility unlike any other. In other words, they can turn the most basic of dishes into something fantastic.

“Most of our products have some sort of zest in them. And we tell people, it’s because there’s not a machine that zests for us. We’re hand-creating. You’re getting true flavour. We took the time and effort and love to make something taste the best it possibly can.” – Charles

The Chuckleberry team assures all tasters that they don’t need to be a great cook to make great food — their lineup of sauces will take care of most of the work! They even boldly state… WE DO THE WORK, YOU TAKE THE CREDIT!

“If you’re not going to make something taste the best it possibly can, why even bother making it?” – Charles 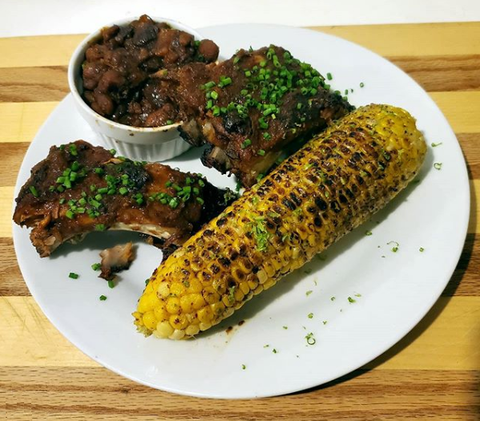 For more experienced cooks, the Chuckleberry Trading Co. challenges tasters to level up, experimenting with Chuckleberry products in new recipes. Here are some the duo have created:

Recipes To Try With Chuckleberry

Get Your Chuckleberry Sauces & Hummus In Aurora

From their smokey CB Sauce to their top-selling Chimichurri, Chuckleberry has something for every type of dish.

Buy yours at Maunders Marketplace today… and stay tuned for their pomegranate vinaigrette and pesto… coming soon!

“We feel very lucky to have gotten into the market in Aurora and to have connected with Allison at Maunders. The support has been amazing, and the feedback has been great. We want to say a big thank you to everyone.” – Stuart